Focal Molography in a Pandemic

Focal Molography in a Pandemic

After over a year and a half, the COVID-19 pandemic is still ongoing and is showing no signs of slowing down. It has proven that despite the development of our world on all fronts, we were ill-equipped to handle a pandemic. Somehow, it feels as though we have been one step behind the SARS-CoV-2 virus since the beginning. Although our battle with the virus isn’t over yet, there is a light at the end of the tunnel. Indeed, humanity pulled out a powerful weapon to overcome this pandemic, and thus far, it has proven to be the key to our small but significant victories: technology.

The surge of the pandemic was incredibly swift; at the time, the only solution to slow its progression was isolation. As the world began to re-open, caution ruled above all else; preventing further infections was the main preoccupation. Rapid testing for coronavirus infections became a highly implemented method to detect infections and prevent further spreading, and continues to be used today.

Although it was a highly debated topic amongst doctors and scientists, rapid antigen tests have overall proven to be helpful in preventing further spread of the virus. However, they are not powerful enough to detect all infections, which is why PCR remains the gold standard in COVID-19 diagnosis. Together, these two technologies have covered all diagnostic needs; but could we do better?

Ideally, a technology as cheap and fast as rapid antigen tests but as sensitive as PCR would be used for detection of COVID-19 infections. No such technology exists; however, focal molography comes close. Although it does not provide the sensitivity of PCR, as it does not amplify the genetic material in a tested sample, it provides significantly faster, cheaper, and simpler readout than PCR testing while also providing more accurate readout than antigen tests. Indeed, because blood samples could be tested with focal molography, the risk of withdrawing sub-standard samples as seen in rapid antigen tests is non-existent. It will not detect early infection stages as well as PCR, but could most likely outperform rapid antigen tests without compromising on the simplicity and speed of the readouts they provide.

Curious about how PCR tests work? 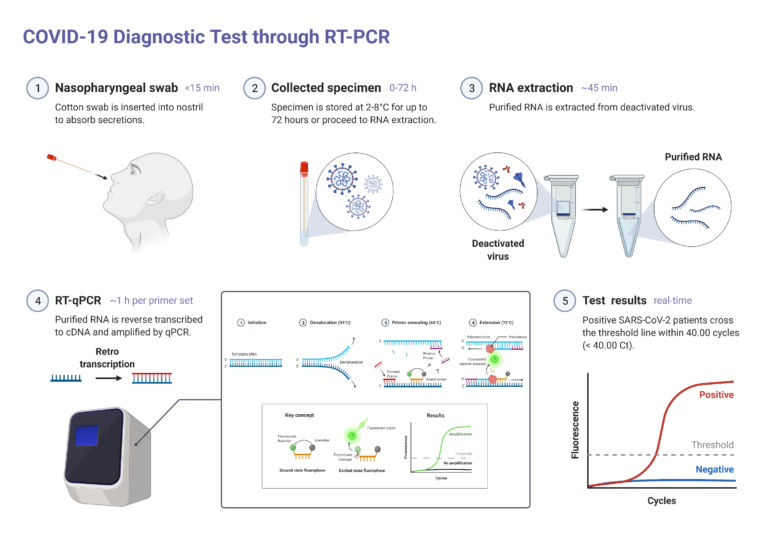 Perhaps the greatest feat in medical technology seen this century was the roll-out of a new vaccine in the space of a year; biopharmaceutical manufacturing usually takes a few years in a best case scenario. Not only were several vaccines manufactured in such a short time span, but a new vaccine technology made its debut: the mRNA vaccine. Today, many kinds of vaccine technologies have been used to develop protection against SARS-CoV-2, but the mRNA vaccines developed by Moderna and BioNTech are by far the most popular.

Manufacturing vaccines, and all biopharmaceuticals, is an incredibly lengthy and tightly regulated process; everything must be perfect, or the effect and/or safety of the drug will be compromised. There are four main attributes each biopharmaceutical is tested for: identity, purity, potency, and safety. No single technology is capable of characterizing all these attributes; many tests and technologies are performed to cover them all. However, focal molography can perform tests relevant to all of these categories; it could develop into the technology closest to becoming the all-in-one quality control platform still missing today… Stay tuned!

The COVID-19 pandemic has pushed development in the field of biopharmaceuticals to new heights; the biopharmaceutical sector is booming. Now more than ever before, companies in this sector are going beyond the limit of what we thought was possible to develop innovative and transformative technologies. Focal molography could be one of them!