SARS-Cov-2 is not the only virus responsible for a pandemic this century; the human immunodeficiency virus, more commonly known as HIV, is another. Unlike SARS-Cov-2 however, HIV infection cannot be cured; transmission is irreversible. Despite the significant progress researchers have made in understanding this virus, it has not been eliminated; in many developing countries, the HIV epidemic is still flaring.

HIV is a virus acquired via contact with contaminated bodily fluids, and infects a particular kind of immune cell called CD4+ cells, or T-helper cells. These cells are a crucial component of the immune system, as they are responsible for bringing all other immune cells and their effector responses together; they are the commanders. When HIV infects these cells, it reprograms them to produce more viruses which can go on to infect more CD4+ cells; T-helper cells become HIV factories, and in the process, they die. After the initial exposure to HIV, the process during which the virus replicates can take years, during which patients often do not show symptoms. The real problems caused by HIV appear later: once lost, CD4+ cells are not replaceable. Because of their critical role in immunity, infected patients’ immune systems become severely compromised, making them not only extremely susceptible to infections, but also unable to fight them. After reaching a critical threshold whereby almost all CD4+ cells have died, patients reach a stage in which they are severely immunodeficient, a stage better known as acquired immunodeficiency syndrome, or AIDS.

As mentioned above, HIV targets a specific kind of immune cell called CD4+ cells (T helper cells); this is because one of the molecules found on the outer shell of the virus, called gp120, mainly binds a surface protein unique to these cells: the CD4 protein. When binding of gp120 to CD4 occurs (step 1 in image below), it allows fusion of HIV’s membrane with the T cell’s membrane (step 2), during which all the viral material contained inside of the HIV membrane is injected into the T cell. Just like most viruses, HIV contains all the necessary components to further replicate itself; it then uses the infected cell’s machinery to carry out this task. In other words, the virus brings its own ingredients, but uses the cell’s kitchen. Once inside the cell, it starts by turning its genetic material, in the form of RNA, into DNA, with the help of its special enzyme called the reverse transcriptase (step 3). This double-stranded DNA molecule is then transported to the cell’s nucleus, where the T cell’s DNA is located, via another enzyme called the integrase. The integrase not only brings the DNA strand to the nucleus, it also cuts the cell’s DNA to integrate HIV’s DNA inside it. This is the point of no return for the infected cell, as viral genes are now encoded in its very own DNA (step 4). This is where the virus utilizes the cell’s machinery to its own benefit; the T cell transcribes the DNA (step 5), then translates it into new viral proteins. Essentially, the virus gave the cell its ingredients and a recipe to follow, and the cell then does all the cooking, providing newly synthesized viral proteins for the virus to replicate. When all the necessary proteins are synthesized, they are assembled into a new particle (step 7), which fuses with the cell’s membrane (step 8) and is subsequently released to infect other cells (step 9). 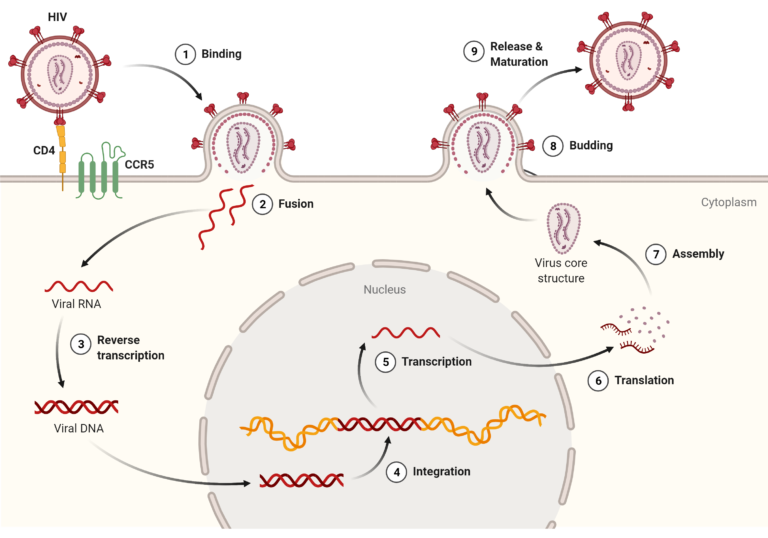 There are currently three ways to detect an HIV infection: an antibody test (with an ELISA for example), an antigen/antibody test, or a nucleic acid test. The first two are most reliable several weeks to several months after exposure, as they require the mounting of an HIV-specific immune response from the patient, which is not immediate. The latter test gives a measure of the amount viral genetic material in the blood; this one can yield results much earlier, but is much more expensive and less commonly conducted for diagnosis. It is however the gold standard test for patient monitoring after the diagnosis.

Indeed, though HIV infections cannot be cured, they can be treated well, in a way that avoids illness and that limits transmission. Once a positive diagnosis is made, patients are offered antiretroviral (ARV) treatment to reduce viral replication in the blood. If taken consistently, this treatment reduces the viral load (the amount of viral RNA in the blood) to an undetectable level, enabling a healthy life for patients. ARV has shown to be very effective, but to guarantee patients’ health, monitoring viral load is crucial to ensure the treatment is working long term. Unfortunately, viral load monitoring is not the standard practice in lower income countries, mainly due to its cost and poor accessibility. Although diagnosing HIV infection is a necessary first step, regular monitoring patients with HIV remains the true bottleneck in resolving the AIDS epidemic in developing countries.

A cheap and accessible test that can rapidly and sensitively detect the presence of HIV in the blood: this is the holy grail that the HIV epidemic has been searching for. Today, one technology could provide some relief to the burden that patients living with HIV face: focal molography.

Current viral monitoring is done by extracting genetic material from cells in a patient’s blood sample. Infected cells have incorporated HIV’s genetic sequence into their own DNA: by extracting DNA from cells in a blood sample and testing it, clinicians can know how much of the virus’ genetic material is present in a given amount of blood. This test is extremely sensitive, as the molecular interactions used for the read out are extremely stable and robust. For this reason, should the test indicate that no viral genetic material could be detected, it is safe to assume that the patient’s viral load is extremely low and negligible, meaning that the virus cannot by further transmitted and that the patient’s immune system is protected. However, should the test detect genetic material from HIV, the patient’s health could be compromised and there is a risk of transmission.

Conducting this test is expensive and impractical; it requires specialized laboratories and is most commonly not conducted in clinics, particularly in developing countries. Furthermore, there can be significant waiting times between the time of the blood sample submission and the time of the test read out, which can greatly affect patient outcome. It is therefore not adapted for patients needing to be tested several times a year.

Perhaps the main constraint faced with viral load monitoring is the need to test for viral RNA; this requires many intermediate steps (RNA needs to be isolated to be measured), making it impossible to test a patient’s blood sample directly in a clinic. One way to overcome this problem could be to use a different molecule to measure the presence of HIV, ideally a molecule that can be detected without any isolation steps, such as a surface protein expressed by HIV. One such protein is gp120, a surface protein largely responsible for the infectivity of the HIV virus. Another is p24, a structural protein that makes up most of the HIV viral core, or ‘capsid’. Detecting the presence of these proteins could be used as a proxy for the integration of HIV’s genetic material in a cell’s DNA.

Detection of viral proteins in a blood sample could be performed within minutes using focal molography. For example, with a mologram composed of gp120’s binding targets (e.g. CD4 proteins), cells expressing gp120 on their surface (i.e. cells infected with HIV) can easily be detected. This change of detection mechanism comes with some compromise: developing such a test would likely require establishing new clinical threshold values and ranges. Furthermore, it would provide only an indirect and perhaps less accurate read out for the presence of HIV, instead of the direct and irrefutable read out of a nucleic acid test. Nevertheless, focal molography would provide sufficient information for clinical purposes, and would additionally greatly facilitate regular HIV monitoring, as it would enable testing in clinics with immediate read out. This is arguably more important for resolving the AIDS epidemic; a less direct test is better than no test at all, which is currently the situation many patients face in developing countries.

HIV/AIDS is just one of many diseases in which focal molography could play a pivotal role. The speed of its read out, its sensitivity of detection, and its ease of use could prove not only to revolutionize diagnostics and therapeutics in the Western world, but also provide new possibilities in developing countries.

Special thanks to Dominique Braun from USZ for his helpful insight on HIV infections.